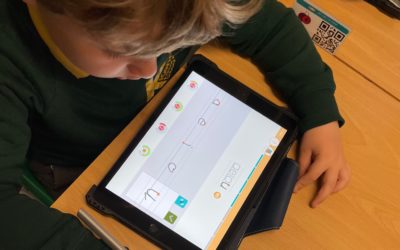 Posted at 19:58h in Case studies by Kaligo

Break the link between geography and destiny

“The results with handwriting on Kaligo has blown us away, with one pupil moving up two-year groups in just a few weeks.”

Kender Primary School is an inner-city London school with 450 mixed gender pupils aged 3-11 years.The school is culturally rich and inclusive and is committed to delivering a rich, inspiring curriculum, fostering opportunities for every pupil to achieve their personal best.

The school is set in London, which as with most cities, has areas of high deprivation. However, Kender Primary is a ‘Good’ School and ‘Outstanding’ in many areas. Over 70% of pupils attending the school speak English as an additional language, and pupil premium is also very high.

No pupil left behind

Many pupils who start behind never catch up. However, this is not the case as Kender Primary. When pupils arrive to start school, the team at Kender Primary take pride in getting pupils back to basics, teaching them things like doing their zips and using cutlery.Then, pupils move on to mastering holding a pencil correctly for the first time, as Year 1 teacher Sophie Lamb explains:

“For many pupils starting the school, they may not have seen a book written in the English language.And for some, reading and writing at home in English is not a priority as it’s not the first language in the home.”

Letter formation is known to impact on the speed, flow and enjoyment of handwriting, says Sophie:

“The challenge as a teacher is it’s difficult to see every child form a letter with 30 children in the class, and it’s impossible to stand every child.The issue is that the end result looks the same, but we need to know how the letter was formed as if they can form letters correctly, they can write with more speed and accuracy.This makes writing much more enjoyable.”

“We saw Kaligo at BETT a couple of years ago and were keen to see what the potential impact would be with our pupils, and after seeing the opportunity to take part in an 8-week Impact trial with Kaligo, the school signed up and were eager to see what the impact of the class would be.

The Kaligo app uses the latest AI technology to monitor a child’s handwriting as they use a stylus to trace letter outlines on a tablet.

Looking at how a child writes letters can provide teachers with an overview of any neurolinguistic processes behind a child’s own writing method. By seeing how they control the stylus on a tablet and how long they take to form different strokes or letters, teachers can easily see where a pupil is struggling and where they are thriving.

Every child gets immediate, personal feedback with their handwriting during class; this just isn’t possible without using technology.Using this information, teachers can see in a few minutes whether the pupil needs any extra support or whether there are any areas they need to spend more time on.

Kaligo uses machine learning (AI) which provides pupils with real-time, automated, and corrective feedback.Based on six years of research at the Laboratory IRISA/INSA, Kaligo has collected and analysed 15,000 handwriting strokes.  Each handwriting stroke is analysed based upon shape, direction, and order and identifies any difficulties children as young as age three may have with forming letters, numbers or even if they have an issue with pencil control.

Children really enjoy using Kaligo; as Sophie says, “Using EdTech like Kaligo makes handwriting fun.We have 1-2-1 iPads at our school, and the children cannot wait to arrive in class, get the tablets out, and start writing.As they get immediate feedback and can then make an adjustment and improve, they see the results instantly, which makes them much more engaged with handwriting.”

“The beauty with using an iPad to practise handwriting is that there is less pressure.Also, today children are used to gamification and iPads, so the familiar format of Kaligo meant that pupils were excited to try it.

“Using iPads, there’s less pressure for the pupils to get it right; they can simply try again. They love practising handwriting and enjoy collecting the stars of getting the green bar all the way around.

“We don’t usually need to motivate them, but when we do, we give pupils the incentive of the ‘free mode’ after lessons which is gamified further, although still educational, they love doing that.”

The school were excited to see the impact, but the results blew them away, says Sophie:

“We certainly expected to see some improvement, of course.But to have one pupil move up two-year groups within eight weeks simple blew us away.One child in our class struggled with handwriting and wrote tall spiky capital letters at the beginning of the reception year level.By the end of the trial, the child was writing as one would expect at the end of Year 1, a fantastic transition in 8 weeks.His handwriting has been completely transformed in 8 weeks, and he now writes within the lines and is forming letters correctly.Brilliant progress, beyond our wildest dreams, It’s really impressive.”

Make sure to take a look at our other success stories.